Three years ago today my friend came home from work and told me and husband (who was my fiancé at the time) that a mutual friend of ours was looking to re-home her puppy. Now we had been discussing getting a dog in the previous few weeks but had decided that right at that point wasn’t the best time. We had only just moved into our own place, husband had only just got his job back and we were still learning how to look after ourselves, let alone another living being.

Despite these factors and given the fact that we are fairly (stupidly) spontaneous people, we decided to try and find out more about the puppy. We already knew a bit about him as the woman who owned him is a mutual friend of a few of our friends. It was at this point that another friend of ours messaged me to draw our attention to the puppy in need. So we decided it was clearly meant to be. I messaged his owner as husband, being sensible, wanted to meet the pup first to see what he was like and if he would be a good fit for our household. We arranged for him to be bought to the house to have a meeting to find out more and I was so excited.

The thing is that at this point in my life, I was feeling terribly down and unmotivated. I was still working but work was pretty much the only thing I decided was worthy enough for me to get out of bed or off the couch for. I also knew nothing much about dogs, especially the difference between breeds of dogs, as I had never owned nor lived on a permanent basis with a dog. To say that I was being irresponsible at this point by even contemplating taking on this dog would be about right, if not a terrible understatement. Also just after the emails had been exchanged and a meeting arranged, husband got called away and not twenty minutes later, there was a knock at the door. When I opened it in bounced the sweetest but most energetic bundle of fluff I believe I have ever seen. The little husky pup bounded around our house and into the yard whilst I chatted with his previous owner. I discovered that he was six months old and his name was random (he was named by the lady’s son, so we changed it). I knew that he had to be mine and was told that if we were happy to keep him then she could leave him with us and he would be ours!

Like I said, terribly irresponsible and selfish but we had ourselves a Loki. I had to phone husband and gently explain to him that we had a new member of the family. Luckily he was happy and just laughed. For a brief second there was a moment when I thought ‘oh no, what have I done?’ However as soon as he jumped up on the couch next to me and snuggled in to fall asleep I knew it was the right thing. I needed to learn though and I needed to learn fast! I researched pretty much everything I could think of.

Things we have learnt since owning a husky:

If we want this boy to chill out even the slightest bit then he needs to work some of that energy out. Wether it be walks, playing with his toys or doing some training.

He sleeps a lot more than I thought-

Pretty self explanatory but I’m so grateful that Loki can be just as chilled as we are. Also some of the positions he sleeps in are hilarious. There’s nothing cuter than seeing a husky sunny sibe up. 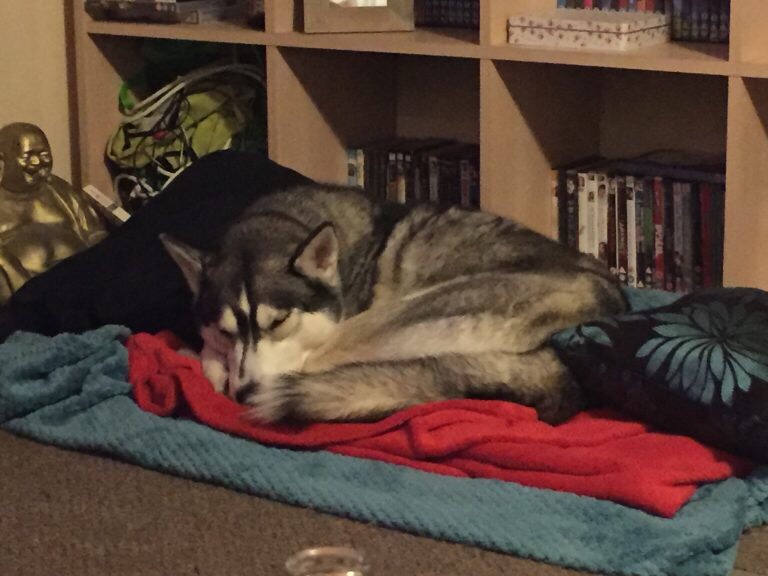 My gosh this boy has a lot of hair! Sometimes it’s a wonder he hasn’t gone bald. In between coat blows (the big moults) it’s not too bad but considering he blows his coat for months at a time, we are pretty much constantly covered in hair as well as eating it, drinking it and sleeping in it. Also for someone who wears black 90% of the time then lint rollers are a must! and loads of them. 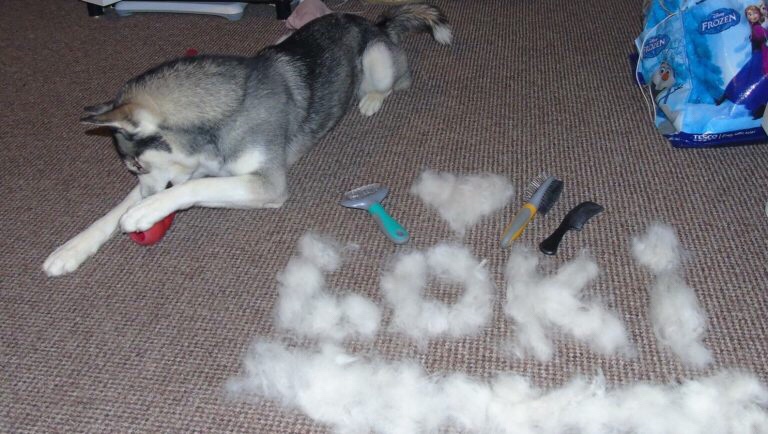 I never knew a dog could have as much personality until we got Loki. He is so funny and you can see all the expressions on his face like when he’s happy or sad, tired or being cheeky or when you ask him to do something and you can see him thinking about wether or not it is worth his while.

I feel like having a husky is similar to having a toddler ( we dont have any kids so please don’t take my word on that), he knows what he wants but can’t always tell us and I think this frustrates him when we don’t get it straight away. He also likes to tell us off if we ask him to do something that he’s not particularly keen on.

Off the lead– this is apparently a really old debate between the husky community (or so I have seen on Facebook etc). Now what other people do with their dogs is none of my concern. If some people walk their huskies off the lead then that’s up to them. I have always wanted a dog that would walk beside me without needing a lead and would come to heel immediately whenever called. Unfortunately for us though, Loki had other plans. We live in the countryside so when Loki was younger we would practice his recall and off lead training in one of the fields and he did okay but unfortunately he has a really strong prey drive and so as we live in the countryside where there are plenty of little bunnies and lambs and birds and cats it just didn’t work out. We tried and we failed. So now he gets walked on a really long lunge lead. He gets the freedom he needs and I have the added security of knowing I’m not going to loose him should he try and chase something small and furry.

His nature– Loki loves people, all people, any people. Some people seem slightly intimidated by him when we go out for a walk and he starts heading towards them, but all he wants to do is say hi. In the house, Loki thinks that basically anybody who walks in is there to see him. Luckily most of our friends are huge dog people but some of them aren’t and probably don’t appreciate that he will give them basically every one of his toys in a bid to try and get them to play. Loki is also a very “unreactive” dog. In the sense that he never barks when someone is at the door however he does get up and go to the door to greet them so they won’t get very far without a full Loki inspection. He also doesn’t bark at other dogs when we walk past them. The most he will do is seem a little intrigued and look at them for a little bit but a simple “walk on” and he will continue on his way. I have never heard a vicious growl come out of his mouth either and he’s definitely more a runner than a fighter and still hides behind my legs if he is scared of something. 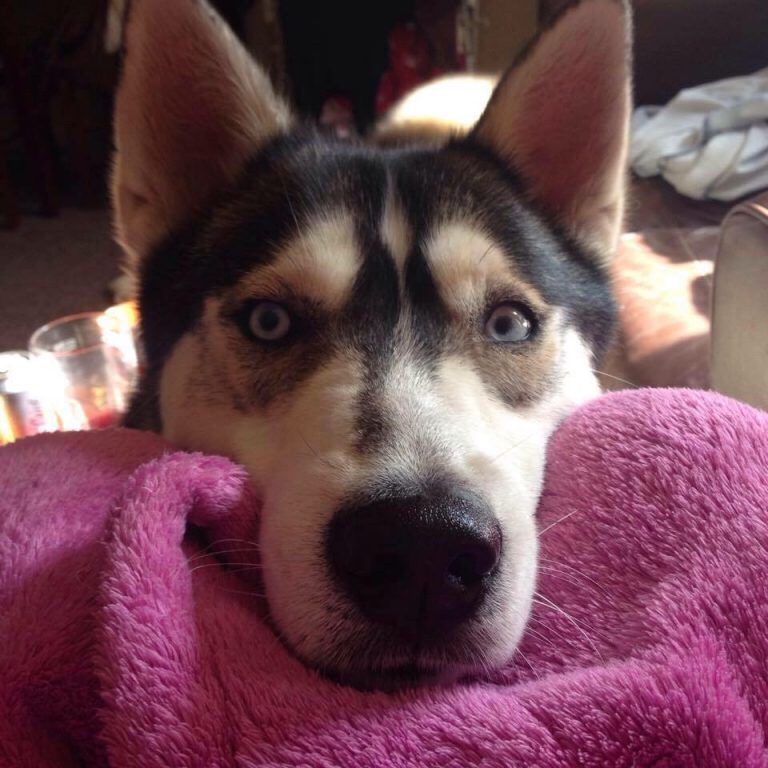 Loki is a pretty independent dog. I’m fairly sure for the first two years of his life that he was actually completely oblivious to the fact that we were on the end of the lead when he would go for walks. Very rarely nowadays will he come and have a snuggle. He does snuggle sometimes but only if it’s on his terms. When we first got him, he was pretty much constantly attached to my hip. He would lie with me on the sofa, in bed and even follow me to the bathroom. Now he is a bit more happy to spend time on his own and I kind of miss it. 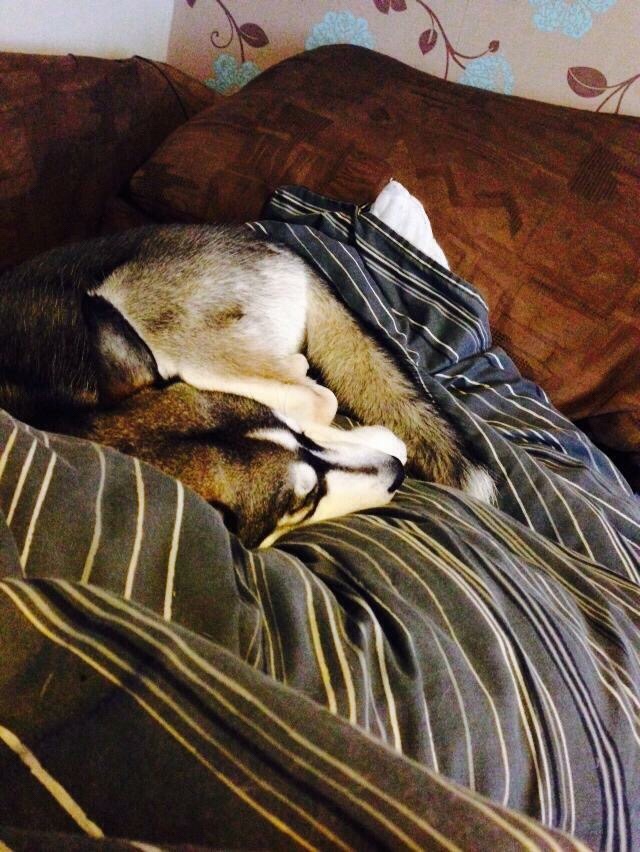 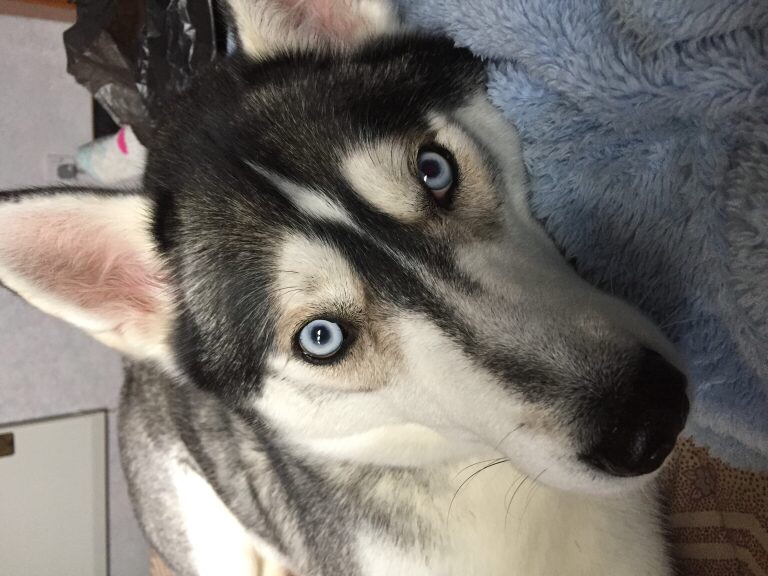 Now I’m not an expert on this, this is just our own personal experience. Last year around Christmas time we noticed that Loki had a scratch on his eye. We originally thought it was due to one of his toys so we removed the toy. Then we noticed that it kind of spread. The skin around his eye had become dry and scaly and sore looking and he was loosing the fur around it. We also began noticing he was developing a similar looking sore on the corner of his mouth and on his nose. We took him to the vets and they thought it might have been allergies so they gave us antihistamines and an antibiotic (because he had been rubbing the sore had become slightly infected). It healed up slightly but as soon as the course of antibiotics was finished the sores flared up again. I had previously read up on zinc deficiency (when we first got Loki) so knew that it can be a common problem in huskies due to how their systems work and may not be something that a vet will immediately think of. So the next time we went to the vets I suggested that zinc deficiency could possibly be the cause. Anyway after some chatting and a few tests the vet agreed and Loki was put on a course of zinc tablets and we changed him to a grain free food. He seems to be doing okay now and has been off the zinc tablets for about 10 months. If he flares up again though then he will have to start them again as zinc deficiency can be an I’m going problem.

Anyway, we have had our boy for three years now and I honestly don’t think I could love him any more than I already do. We are all still constantly learning and adapting and training but for the most part I can’t fault him and usually if he does do something wrong it’s because we have messed up somewhere along the line. I have no doubt however that he turned up quite literally on our doorstep at just the right time.

Wife, first time mum of one son and fur parent to a handsome hooskey dog Born in Bedford now living in SW Scotland View all posts by Gemma

Follow Leo Jack and Me on WordPress.com
Join 85 other subscribers